I met Sonny Wharton in August 2011 at the CRASH FESTIVAL and this is what he had to say about his experience and his journey so far, within his life and music career

Did you enjoy tonight? I Really enjoyed it, I love playing to crowds you can’t really top it. It gives me a natural high and it’s really nice to see people enjoying themselves. It’s nice to see something going on where I’m from and people trying to push the local scene again, it’s awesome. Hopefully this year will go well and develop for them.

I’d be happy to come back and play here again, its like a party for me and I’m having so much fun. 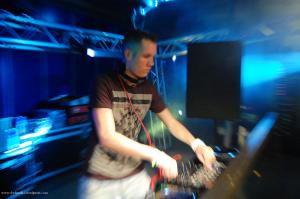 Tell me a little about your journey? I started out as a DJ, and the whole market has shifted over the last few years. You need to be producing music, producing your own sound. I started getting into production a few years ago, as that developed that’s when Pete Tong, Mark Knight and Steve Angello was supporting me. Playing my tracks supporting my label and releasing my records on their stuff. I personally never plan a set I just usually go with the flow. There’s always a few classics to play.

Last week Sonny  was at Nozstock Festival, he’s played there for the last few years and closes their garden stage, which is the main outdoor stage for the dance acts.

This year is the best year yet for him, they even did a stage invasion where half the crowd just came onto the stage, “it was like a house party, it was amazing“.

I asked Sonny about the venues he’d played at, Pacha and Global Gathering, there’s nowhere else to play is there? Lots of places it’s a big world. Originally I got my break a few years ago. I went out to Ibiza and quit my job here, I thought maybe I’d get lucky and play in a bar or something. I ended up winning a competition for a DJ magazine and I got to play Amnesia etc all off the back of winning that.

I played at Global Gathering last year and Wickerman, I play there every year, this year was their 10th anniversary. It’s is one of my favourite festivals.

In the beginning he wasn’t involved in the music industry at the time and didn’t know how it all worked, he hit the ground running, Sonny had to learn quickly and build a profile.

He did a remix for POSITIVA years ago. Had a track release on Steve Angello’s label called Brass, “I think it was 1 of their biggest selling tracks of last year”.

What’s your favourite gadget? I’d say my blackberry bit sad but I live on it ha-ha.

Are you thinking of doing yr own music video’s? Yes my brother actually makes films and stuff for a living, so yeah we’re working on something at the moment.

Anybody who’s actually interested in DJ’ing or the music scene, how would you encourage them? It is tough you’re going to get knocked down time and time again. Keep being persistent and keep strong in your own identity rather than just copying everyone else, you can get through but you’ll get doors shut.

Initially as a career there is no money to start with, you got to put in a lot of work and be prepared to put in a lot of time into it too. It wasn’t all plain sailing for me, even after winning the DJ competition its been up and down, same as any artist.

Like I said the last few years I’ve had to adapt as a producer, it’s a whole new skill set I’ve had to learn, while still being a DJ. “You need to adapt to what yr doing and push the hell out of it” 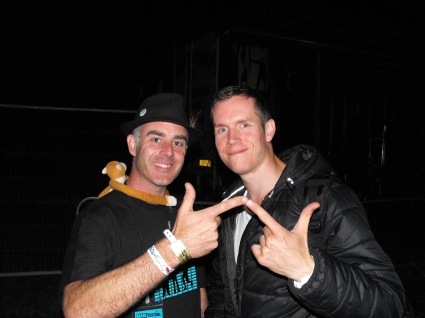 Sonny and Me @Crash Festival August 2011