The Soulful Ellie Lawson is a London based singer/songwriter who has her feet firmly on the ground, knows her direction and produces nothing but great music.

She’s set up her own record label ‘Create your own Reality’. You can hear her music in all the UK and USA ‘Starbucks’ stores. She’s featured on iTunes front page as ‘New and noteworthy’. Did I mention she’s toured the USA.

Having had many conversations with the likes of Ed Sheeran, Ben Howard, Sting, Lily Allen and many more it’s obvious she’s moving forward in the right direction. Also as you dig a little deeper you’ll find that she’s not afraid to mix it up somewhat and is involved in the dance scene too.

Her latest album ‘Resonate’ is available now for an amazing £4. Filled with relaxing harmony’s and strings, you could happily have ‘Resonate’ or any of her previously released music on repeat for hours and let your blues quietly slip away. Recently I spoke with Ellie and this is her story so far. 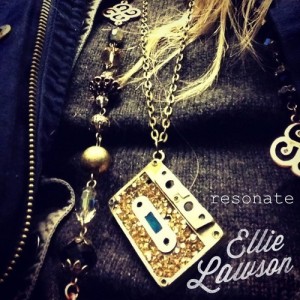 Your own record label ‘Create Your Own Reality’ what inspired you to set that up, what’s the story. You was signed to Atlantic USA right? Yes I was signed with Atlantic USA. When that came to an end I set up my own label and put out albums under the label ‘Create your own Reality’ basically to remind and inspire me to keep being pro active and get on with releasing music myself!

Am I right in saying you sold over 25,000 units to Barnes and Noble, a Book store. How did that work and what CD was it? Yes, Barnes and Noble were sent an advance copy of my debut album ‘The Philosophy Tree’ (on Atlantic) when it didn’t come out with the label who were going through a massive merger the head of Barnes and Noble tracked me down and bought all those albums as CD’s and sold them in their 450 shops in America some of which we toured!

Did you have a track produced by William Orbit, which one and how did that come about & did you meet him? I was given some backing tracks by his manager and wrote to them (the songs ‘Inside Out’ and LA on The Philosophy Tree) I recorded the vocals in North London with a friend and send them back and William Orbit agreed that I could have them on the album! So I didn’t get to meet him but loved writing to his amazing music.

It seems you also like to touch on the dance scene, even your art work for ‘Resonate’ had a kind of clubland feel. Are you heading in that direction or do you prefer acoustic style? Yeah I like both. In the early days when I was starting out I used to write to backing tracks and anything I could get my hands on. I’d go to record shops and buy obscure Hip-Hop instrumentals and I’d steal my brothers Orbital records and sing and wail to those and record myself! So it feels natural to me to do what ever music I fancy doing. I’ve always liked mixing up the genres.

Your songs are being played in Starbucks, is that a recent thing and is it National? Yes my main thing now is writing songs for shops worldwide, its great getting emails from people who heard my songs playing. Its a good environment for them to be heard, like a new type of radio play as people have Shazam so they can track me down and hound me to get a song. The album I just released called ‘Resonate’ was only released as I got so many emails asking for the songs that were played in Starbucks USA and UK.

What do you enjoy to do in your spare time, besides music?
Well my life revolves around writing, performing, rehearsing, recording and finding homes for all the songs, which I do on my own and also with my boyfriend of 10 years Dave Harewood! When I’m not doing all that I love taking my dog out for long walks in the park, reading about English history and going out for meals with friends!

Have you met anyone famous or worked with anyone else?

I have met or emailed with loads of artists before they were famous – Lily Allen, Ed Sheeran, Just Jack, Ben Howard! I worked with DJ Lethal on my first album (He co-wrote the Jump Around track by House of Pain, that must be the most played party track ever) I’ve met up with Hip-Hop God Russell Simmons who had me on his ‘Wake Up Everybody’ album and the singer Akon when I was living in America.

Most enjoyable gig ever, was it 02 N.Y.E?
Yes definitely Brixton Academy New Years Eve! 5,000 people who all knew the song I wrote called ‘Wide Awake’.

If you could be on holiday right now, where would you go and why?(money no object)
Barbados! I went in 2006 when living in America and loved it! The clear blue sea and white sand. It took me a while to adjust and believe I was really there. It felt like I was in a picture postcard. The food was amazing and swimming with the fish was beautiful.

What’s your dream/main goal or have you achieved it already?
My dream is to make the music I love and have others listen to it and love it too. On a small scale this is happening now, so I am living my dream and I love it. I appreciate every single person that leaves me a comment to say they like what I do.

I really appreciate it more than ever because it has been my dream for 10 years and I have had many times when I couldn’t get any momentum to get my music out to people. It’s much easier now and I am building it myself, which is the dream really, because then its just between me and the people that love music and I don’t have to bother with any of the politics, petty prejudice and meanness of the music industry.

Before you go to a gig say at 7pm, what’s a typical day for you and how do you like to prepare, do you get nervous?
Well I do all my emailing in the mornings, play through the songs to make sure I’m confident and will try not to run around too much

I’ve learned that being chilled makes a better gig, I will probably read and do some meditation and vocal exercises! I have always told myself I don’t get nervous and it usually works until 5 minutes before I get on stage! Then I just try to focus on what I’m singing and try to lose myself in it.
What’s happening right now and lined up for the rest of 2013 and what are you looking forward too?
I’m writing loads of songs for shops at the moment which is perfect for me as I get to write anything I like and know that it will get used, and I will get paid. Also I’m able to put out new material more regularly on iTunes and my website.

I’m building my fan base by being pro-active and approaching people that like the same music as mine. For once in my life I’m focusing on what I’m doing now and not planning too much in the future. I believe that will take care of its self if I am really passionate about what I’m currently doing.

What track do you enjoy performing the most and what’s the story behind the song? Currently ‘Back on Track‘ I love the melody, lyrics and the interaction of guitars with me and my guitarist Dave Harewood. We have lots of new songs that we’ve been working out for the live set, that’s what I’m most looking forward to when we start gigging again in May.

I seen you featured with Ekiti son on ‘Ground Level’ in 2009 was you asked to feat or was you doing what you could when you could? (kind of finding your direction at the time)

Ha, well Ekiti Son was one of the first producers I worked with when I was starting out. That was a freestyle of mine that he had and then put together with his music and released.

Was it you that was on ‘Ellen De Generes show’ where Ellen said you’re going to be a “huge star” live on air. Could you give me a little background as to why you was on the show and when was it?

It was 2005. I met the DJ on the show on a plane and made friends with him! (even though when I met him I had never heard of the her or the show ) I gave him my CD and he played it to her months later. He called me to say she loves it and wants me to go on the show.

Then live on air she said all these amazing things about me and my music and in magazine interviews after.

What words of encouragement could you give to someone who want’s to venture into the world of music.

I would say to have absolute faith and belief that you can live your dreams. I think with faith and belief you can then choose the direction in music that is from the heart and not sell out in anyway or compromise your art.

People want real music from the soul & that’s it. You have believe in its worth and somehow it will lead you to a good and fulfilling career. Its not easy and the music industry is tough. You have to learn not to take things personally and do it because you love it and believe in its value.

On a practical level, write record and perform and repeat. The more you do the more you live and breath it, so that it becomes a natural process and on your journey you will meet the right people that can help you get access to more people. As long as you focus on creating the best of your art that you can.